The Tome of Legends Wiki
Register
Don't have an account?
Sign In
Advertisement
in: Realms of Ragna: Races

Elves (also known as the Eldar) are a common race found on Aldrazar and are considered the longest living race in the realms. These mystical and elegant creatures originate from a realm known as the Feywild giving them a stronger bond with nature and animals.

Standing at average between 5'4" and 6'0" ft. and weighing in between 130 and 170 lbs usually, elves are a naturally slender and athletic race. Elves have a similar range of complexions to humans, with Grey and Moon Elves having paler skin, Eladrin having pinkish skin and Sun Elves having darker pigmentation. Often, elven hair is dark, either brown or black, with copper red or blond hair also found amongst Elves while Drow hair is a pure silver-white. Elven eyes are commonly brown, hazel, blue, or an emerald green and in some cases for Drow are red. Elves are fair and beautiful, handsome, and have pointed ears and no body hair except eyebrows, eyelashes and hair.

Elves mature at roughly the same rate as humans, though they are not usually considered past adolescence until they reach 110 years of age. Unlike humans, elves do not age dramatically as their lifespan comes to a close with the most obvious changes being a change in hair color, alternatively graying or darkening. Most elves remain healthy and full of life up until their death, which, if age-related, is usually an average of 1,000 years.

Grunge Elves on the other hand are High Elves who have been cursed by Corellon for betraying their own kin during the Conflict Wars and now wander Aldrazar as bloodthirsty Elves that lust for combat and bloodshed.

Elves have a number of abilities that set them apart from other humanoid races. Elves can move slightly faster and can move swiftly through even the roughest terrain. Elves are also more preternaturally aware of their surroundings than other races, as well as possessing better common sense. This aids elves in many ways, allowing elves both a high degree of perceptiveness that they can lend partially to allies. Additionally, elves are extremely accurate in their attacks, having a degree of precision that is unusual for other humanoids.

Languages: Human, Elven, Dwarven, Gnoll, Goblin and Giant. (Any other languages in addition to these are only possible if the character has an INT of 16 or higher, with one additional language possible with each point above 15)

Infravision: 60 ft. Within 30 ft, the Elf will be able to determine the shape of what is producing the heat and will gain bonuses depending on the object. 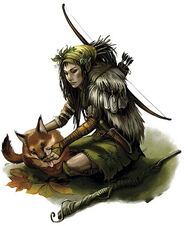 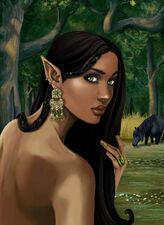 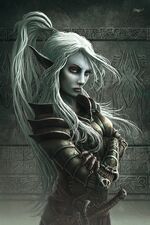 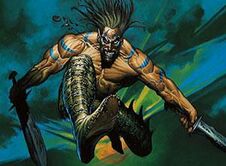